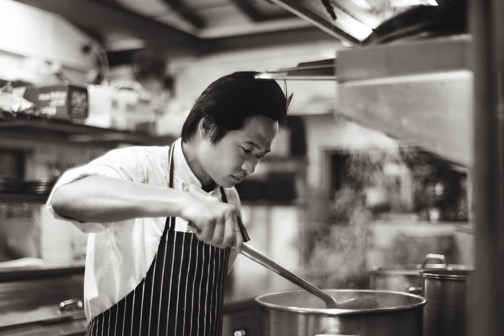 There’s a simple pleasure associated with cooking – some find it cathartic, some soothing, and for some, it’s a calling. To go against the expectations of society, battle the three-headed dragon called ‘peer pressure,’ break through the box that someone else drew for you to be in, and pursue what you love deeply puts you head and shoulders above the other participants of life’s rat race. And when you do it, against all odds, you deserve all the accolades that come your way.

For Yeo Kian Tiong, pursuing a career in cooking was a calling he couldn’t ignore.

After completing his Bachelor’s in Microbiology and embarking on a career in IT, he just couldn’t shake off this feeling of incompleteness that enveloped his daily life. He needed to break out of the box and curb those itches he felt in every fibre of his being. He quit his high-paying IT job and enrolled in the prestigious Le Cordon Bleu Culinary Academy and kickstarted a chain of events that would take him down scary, uncertain paths that promised culinary greatness. Even while most people would give up halfway, KT, as he’s fondly known in the industry today, stuck to his goals and rose up the pillars steadily, cooking his way to greatness.

Blessed with the gift of taste, he used his knowledge of traditional Chinese cooking and mastered four of the toughest cuisines in the world – French, Italian, Cantonese, and Japanese. Years of hard work, learning from the best in the business, and applying his own unique gastronomic principles, KT proved that pursuing one’s passion almost always pays off.

He set up some of Singapore’s well-known restaurants like Xi Yan, Sumi Yakitori, Cornerstone, and the crowd favourite – Ramen Monster. He also ran his private fine dining service and has been featured in newspapers, magazines, local television, and radio talk shows. His cookbook Cooking Classics China won the Gourmand World Cookbook Award and paved the way for his second book, Cook Chinese with Chef KT.

With Esseplore, Chef KT handpicks some of Singapore’s best home cooks and help them to build their own culinary business. He believes that home dining is the future and more and more people will opt for the private setting of a chef’s home rather than a noisy, impersonal restaurant.

Going after what you love and doing it with all your heart is what Chef KT believes is the only recipe for success.

Don’t think about it. Just do it.